There is a definitive duopoly in the markets. We are at all-time highs and this scares people immensely. It also makes some absolutely euphoric. The economy is considerably weaker than it has been in any recent recovery so the equity markets are higher despite the sluggish economy. People are saying that the markets are bound to crash because they are so high and the economy is so poor, relative to less recent memory. Prices are inflated and being held up by a mixture of conspiracy theories and the Federal Reserve, so they say. Even the Federal Reserve chairperson was talking about inflated stock prices, but her comments weren't so harsh, and mimic those by Alan Greenspan in 1996, well before the 2001 crash.

It seems to me that, as a relative contrarian, most people I am talking to are skeptical about the markets and that gives me pause. Perhaps the contrarian view is continued growth in the markets. It just doesn’t “feel” like a bubble. Not to say there won’t be some sort of correction, there will be one eventually and many technical indicators point to one, it’s just that no one knows when that might be. A 20% correction one year from now, after 10% growth would put you at a loss, but a 10% correction would not, especially when considering total returns including dividends.

The S&P 500 has gone 1,251 days without a correction, and nearly doubled in price, since it last dropped 10%, as of April 2, according to Bespoke Investment Group. Considering that the S&P 500 averages about one correction a year, we are long overdue. We have, although, been overdue for a correction since 2012. Are we bound for a crash? Consider that from 1990 to 1997, there was a 7 year rally of 223%, so not necessarily.

Time has proven it is always better to be in the market than out of the market, and it remains true. If concerned about a correction, consider dipping in slowly through dollar cost averaging.

Interest rates are near their historic lows but have been moving up and down with great irregularity. The 10 year yield on US Treasury Securities has reached a high for 2015 of 2.28%, up 0.6 of a percentage point, or 39% higher than its January lows. Markets have reacted rather calmly to this news, a marked change from the last time the ten year increased as sharply, back in 2013. The S&P has increased 6.4% since the end of January as developed international markets have increased 11%.

Corporations are borrowing at rates of 6.04%, up from 5.85%, and 30 year mortgage rates are 3.85%. Both of these rates are extremely low, considering where they have been in the past. The increase in rates last year hurt utilities, as utilities have become more like bond alternatives to investors. Because they pay such high yields, money has flooded to utilities since the recession, and this has resulted in their price rising rapidly, outperforming the S&P 500. As rates continue to rise, the question becomes will utilities be impacted like longer term bonds?

Looking at the 6.04% interest rates corporations pay make it easier to understand how some companies and investments are able to pay out 6-10% interest rates each year to their investors. I mention these to potential investors and the “if it sounds too good to be true it probably is” adage comes up. Of course, there are certain risks to every investment, and there are many people who are happy with losing 3% to inflation each year by keeping their assets in a bank account. That sounds like a guaranteed risk of loss for savers, and it sounds too good to be true for the banks, which make money on the spread, but it is true. There are always ways to think outside the box and be successful.

We are still weathering through a slow growth economy but there are signs of improvement. I hear positive signs coming from the construction industry with some privately held supply companies expanding slowly and increasing their territories. Interest rates for lending are still low and it seems the global press is now convinced rates will not rise until September, if at all in 2015. That’s something we called back in February.

April sales numbers disappointed investors, up only 0.2%. The economy still seems to be puttering along. From my discussions with other investment managers and company owners, though, there seems to be an underlying current of positive expectations. Cautious optimism seems to be the continued mantra, and I agree. I am cautiously optimistic about the economy and still think there are many areas where companies can have significant profits in the coming years. I am bullish, but you have to be bullish in the right areas.

Barron’s wrote an interesting piece this week about the value of US currency in circulation with the big question of: where is it all? There is $11,000 per US household in actual cash floating around, up from $8,000 in 2008. That is a staggering sum of money when most people I know have no more than a few thousand in cash in hand, or in safekeeping, on a good day. It’s all in the bank and elsewhere and accounted for electronically. There were some interesting suggestions where all this hard cash goes. Even in the face of credit cards, electronic transfers, bitcoin and other crypto currencies, there is still a reason why people use cash, and not just in the United States.

On a trip to Cambodia a few years back, I was amazed their local currency was used only for denominations smaller than a dollar; otherwise they used US Dollars for everything. It is similar to other countries like Panama, El Salvador, and the British Virgin Islands using the US dollar for most all trade. Hard cash goes to hold wealth for those in the black market as well. If certain nefarious individuals like drug dealers held their money in banks, electronically, they would likely be busted, so they use cash. So much for the demise of the US Dollar! 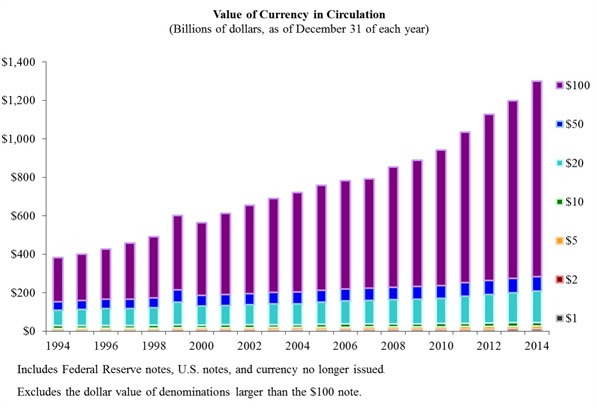 A note about the report:

For as long as I remember, I have been fascinated by the economy and stock markets. Nearly my entire life has been spent interpreting both. I have my Bachelor of Arts in Economics, but have found the experiences of working on a trading floor, and with my clients, have been a far better teacher. In putting pen to paper I hope to inform others about where I see the economy and the market. Perhaps also some insight into where they are headed. This is not financial advice. Enjoy.