Markets are volatile as things have come to a head in debt-laden Greece, Chinese stock markets rise and fall, and Puerto Rico faces its own debt crises. Throw on top of all this terrorist attacks by ISIS, fears of Russian intervention into Europe, and Chinese intervention into disputed waters and there is a lot to be fearful of.  Even though markets are volatile, we still feel strong about the American economy, its stock markets, and worldwide prospects for growth.

China is the most interesting event right now, simply because of the magnitude it seems to be having in the media.  China has been moving from bubble to bubble, all driven by their central bank.  The Chinese Shanghai Stock Exchange in 2014 was up 52% and the market is currently up 86% since one year ago.  This growth has been fueled by speculators in China buying stock on margin in the hopes of making quick fortunes.  China has responded with multiple measures to first stop the rapid price appreciation followed quickly by measures to ensure an entire collapse does not occur.

To recap, Beijing cut interest rates in November to spur investment in the stock market after the real estate market slowed.  This rate cut, coupled with glowing promotions by the federal government in state media outlets, prompted a surge of speculation into the stock market.  This surge was accompanied by heavy borrowing by middle class Chinese.  This borrowing, not uncommon in the United States today (and in the 1990's and 1920's for that matter), helps to increase the speed of a decline as speculators must pay up when their bets go bad.  Even though there is a lot of margin in the market by middle class Chinese, the penetration of ordinary Chinese citizens in the market relative to institutions is relatively low compared to the US.

China has responded to the investment decline with a few actions: further interest rate cuts, a fund set up by the government to buy shares, investigating those betting on declines, and allowing further borrowing to buy stocks.

The Chinese stock market is still a relatively small venue for borrowing in China.  Most borrowing for business occurs through banks, with many ties back to the federal goverment.  The impact of an all out collapse of Chinese equities will not be as severe as it has been in other, more developed, countries.  It is likely just a correction of a bull market that was in dire need of a correction.

Greece is again rearing its ugly head upon the world financial markets as well.  The fallout from a Greece default is less than it would have been a few years ago.  Most of the debt of Greece is now held by other european countries, the international monetary fund and other bailout funds, versus banks and individual investors a few years ago.  The big debate in Greece is whether or not to cede to the demands of the bondholders, who are suggesting further austerity measures.  There was a big vote to not cede to the bondholder demands but it looks like the government is still working things out.  In the meantime, cash is hard to come by from ATM's as the banks are closed and medicine is growing hard to come by.

As a reminder: Greece spent far too much on social programs and other state spending than they could afford.  They did not have the option to debase their currency to pay for it.  This is the main reason for them getting into trouble in the first place.

The impact of a Greek default and potential exit from the Euro and European Union are not as significant as in years past.  This is not "old news" and we have been aware of this for years now.  Furthermore, this should not spread to the other PIIGS countries of Portugal, Ireland, Italy and Spain, as it appeared close to occuring a few years ago.

Puerto Rico isn't on the minds of most Americans, but the US territory in the Carribean has a debt problem.  Though they have been able to make payments, they are still saddled with too much debt, over $70 Billion.  The potential disruption from this is relatively low but there will be some exposure by municipal funds as Puerto Rican bonds were exempt from both State and Federal Taxes if they were to miss payments.  People have been chasing yield in recent years, expecially tax-preferred yield, and that has let them to Puerto Rico.
The Puerto Rico Electric Power Authority has also been in talks with creditors but has been able to remain solvent.  A utility company declaring bankruptcy would be one of the largest municipal bond defaults in recent history and would cast a shadow in the utility industry, whose equity values have risen as people chase yield.
Our Take:

Puerto Rico has been a popular place to park cash for yields and relative security.  It is a reminder to be careful about where we park our cash.  The fallout from Puerto Rico will likely not be too severe. 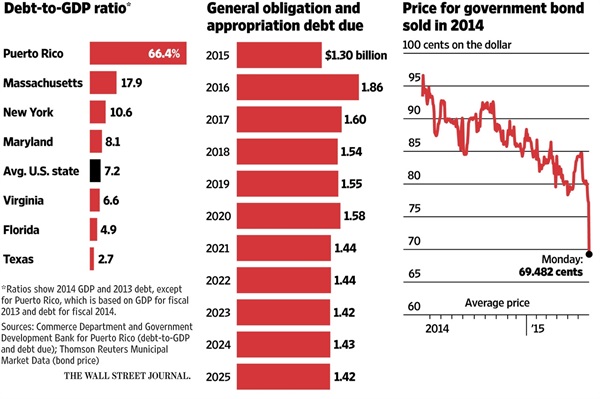 Other News:
The past month has been significant for world events.  The Affordable Care Act opposition has been dealt a blow by the Supreme Court, the Supreme Court also set a precedent allowing for marriage of same sex couples in every US state.  There was a domestic race-based terror attack against a church in Charleston, SC, and a slew of terrorist attacks by ISIS in France, Tunisia, Kuwait and Somalia.

Our biggest concern for world politics and economies are the continued attacks and advances by ISIS and the potential threat by Russia against Europe.